SCOTT HOLLEY at The SVRA Championship race Circuit of America 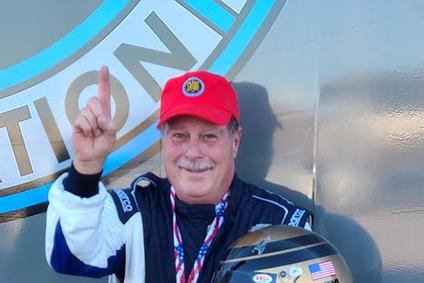 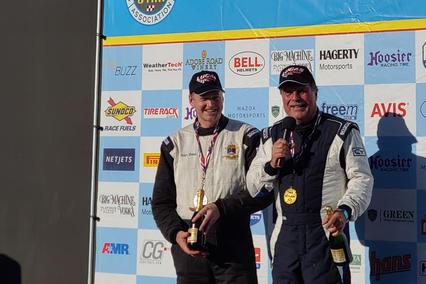 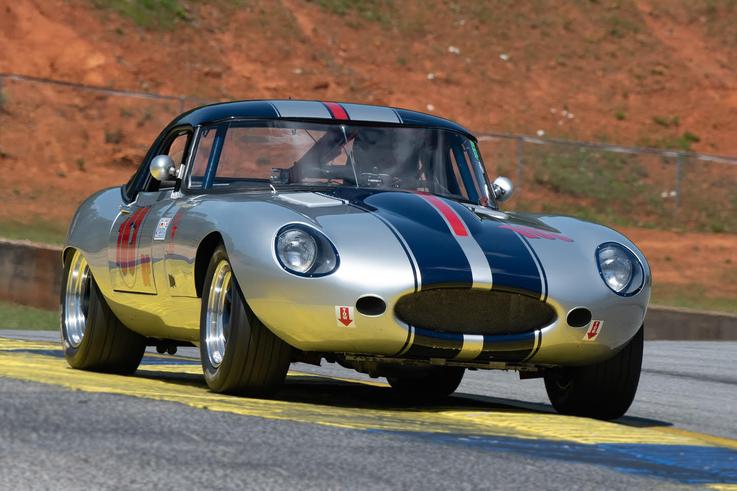 The heavily modified # 77 car (# 177 for this particular event) was placed in Group One alongside a former IROC championship race car, a number of ground rumbling big block Vettes, a host of Shelby Mustangs, a beautiful McLaren and some exceedingly quick Porsche Turbos and RSRs.

Most people in attendance thought that the little black Jaguar would be out of its league (let alone class), but the local favourites had not allowed for the unparalleled race engine building skills of Bill Terry, or the electrifying driving talent of son Trent.

Friday was spent practicing, although a holed fuel line had the Terrys working past midnight just to try to make qualifying on Saturday morning. Bill Terry remarked afterwards that he had been amazed at the number of offers of help he had received from his fellow competitors, some of whom worked late into the evening making sure that their guest from Illinois would have a race car for the following day. This was just one example of the great sportsmanship that was evident throughout the entire weekend. Although the problem was eventually isolated and repaired, Trent had only managed a total of 12 practice laps and missed the opportunity of posting a qualifying time. Accordingly, he started at the very back of the 19 car grid for the 1pm race.

Photo courtesy of Jeff Warner
As the green flag dropped to the thunder of approximately 114,000 combined cubic centimetres of sheer horsepower, Trent Terry stunned the crowd by taking the black E Type past five cars before reaching turn one, picking off a further three before turn two, then gradually reeling in another 9 cars in the first 3 laps.

Lap 4 saw Trent in second place with only local favourite Steve Kent ahead of him in his highly successful Porsche 911 RSR. The sleek black E Type had decimated the rest of the field and literally stunned those in attendance. Jaguar fans in the stand seemed to grow an inch with every passing lap! In fact, more significantly, people started admitting to being Jaguar fans! Pulling 7,600 rpm (170 mph) at the end of the straightway, the Jaguar began to literally stalk the bright orange RSR. On the approach to turn 4 on lap 5, the E Type out braked and out handled the Porsche and Trent dived up the inside at a point on the track where most drivers are only concerned with keeping it on the hard stuff. The Porsche was done. What followed was a driving exhibition for the remaining 6 laps during which a Jaguar victory was never in question. I cannot tell you how proud I was of the Jaguar and my friends Bill and Trent Terry. I have to be honest and tell you that I was more than a little proud of Team CJ, too, as the black E Type sports a number of our performance parts, including torsion bars, a custom built aluminium flywheel and various cooling upgrades.

Time to check over the car and put it up for the night. Other than fuel, # 77 needed nothing. This car was hooked up and performing flawlessly. Could Trent possibly top this performance in tomorrow's scheduled races? You bet he could.

Sunday morning saw standing water on the track from the heavy rains of the previous evening. The black Jaguar was scheduled to go out first at 8.30am in another race that was to serve as qualifying for the main event of the weekend at 12.20pm. Starting on pole as a result of the previous day's magnificent victory, it was apparent from the green flag that the track was extremely slippery. Gunning the gas pedal as the flag dropped, Trent got the car sideways as he crossed the line and had lost 3 places before he got the Jaguar back under control. By the time he appeared out of the backfield and onto the back straight, he had recovered two of the lost places and was challenging for the lead. Unfortunately, turn 4 gobbled him up on lap 3 and the black Jaguar decided to take in a 360 degree view of the Texas countryside. Although Trent managed to keep the car on the black stuff, he was then forced into pit lane for a mandatory stop/inspection before he could rejoin the race.

Now almost a lap down on the rest of the field, nobody held out much hope for the black E Type. Over the next 7 laps Trent managed to catch and pick off about a dozen race cars, ultimately finishing in 7th place. All in all, a little disappointing, but as Trent candidly admitted back in the paddock, "It wasn't the car's fault, I just flat out got too greedy".

The next three hours before the feature race was spent discussing the performance of the car that had won the 8.30am race, a seriously fast IROC Camero that had literally destroyed the field. With the vastly experienced former pro driver Charlie Barns at the wheel, and an ungodly amount of horses under the bonnet, the question on everybody's lips was whether the little black Jaguar could get anywhere close to Charlie Barns in the afternoon's feature race. In typically modest fashion, Trent's reply to the many that posed the question was simply, "If we can't, it won't be for the want of trying". The stage, as they say, was well and truly set.

As the green flag dropped for the main event, the sleek black Jaguar was back in 7th place on the grid with Charlie Barns' IROC car leading off in pole position. What followed next was 29 miles of the most exciting, adrenaline pumping racing I have ever seen.

The track now fairly dry, most of the 19 competitors were back on slicks. Within a couple of short laps, Trent had hauled his E Type up into second place. Lap after lap, the black Jaguar circled the 2.9 mile circuit as if attached to the IROC car with a tow hitch. It was a truly awesome sight to see the hugely powerful IROC car screaming down the main straight with the little black Jaguar glued to his tail. On laps 7, 8 and 9 Trent poked the nose of the E Type alongside the more powerful IROC car, almost daring Charlie Barns to make a mistake.

Photo courtesy of Jeff Warner
On the 10th and final lap, Trent, who by now had become a permanent feature in Charlie Barns' rear view mirror, got even closer to the IROC car. On the final bend before the back straight, with the two cars almost side by side, the unthinkable happened - the hugely accomplished Mr. Barns missed a gear and the little black Jaguar dived into the lead. It was a tiny, momentary error on the part of the Camero driver, and perhaps the single most exciting sporting moment I have personally witnessed. As if scripted for a Hollywood movie, which would have to be called David & Goliath II, the Terry's Jaguar E Type screamed into the main straight and took the chequered flag ahead of the thundering IROC Camero.

I have never felt so much pride for the Jaguar marque. I can promise you that in this particular corner of the world, where the V8 is king, they have a whole new respect for the Jaguar E Type.

Gracious in defeat, Charlie Barns, in congratulating Trent Terry on a magnificent drive, said that he knew he was not going to be allowed a single error. He admitted that the mistake he made was entirely as a result of the relentless pressure Trent had placed upon him. I suspect it may be a while before Mr. Barns checks his rear view mirror without thinking about that little black Jaguar from Illinois..............